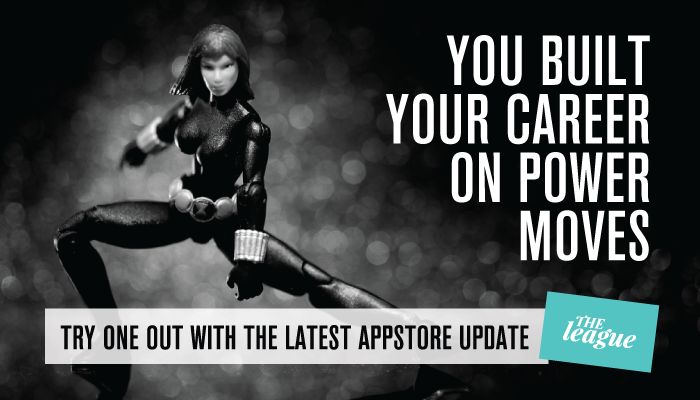 I hate to admit it (especially as the founder of a dating company), but I hardly have time for dating. If I’m lucky, I’m able to carve out time for one date a month, and if I’m honest, I’m likely looking at my phone for half of the date. I know I know, something I’m working on. All this to say the guy better be pretty special – and if I see a profile I think could be a ‘match’ AND I actually have time for a date that week, I want to jump on the opportunity right away.

But here’s the catch: chances are, I’m waiting in line behind a lot of other people who have also “hearted” that profile.

A quick primer on The League’s algorithm:

Let’s say I login and like Billy. My profile is now put in Billy’s ‘hearted queue’. Billy’s profile is shown between 1 and 6 times a day, depending on how often he fits people’s preferences. Let’s say he’s tall and well educated and lives in the heart of San Francisco, and nearly every girl that sees him likes him too. We consider this an ‘AllStar’ profile. By the end of just one week he could have 40 girls that liked him that are now in his ‘heart queue’.

Now let’s say Billy is on vacation, or just doesn’t check in for a couple of days, because, hey, he’s busy and building his empire. Maybe dating is put on the back-burner for a week or two. Now, the next time Billy logs in, the algorithm will give him 2 girls from his ‘hearted queue’ (ranked in order of probability of match occurring), and 2 users who have not yet seen Billy, but the algorithm predicts a high probability of eventual match. We do this so that Billy doesn’t get overwhelmed with matches in one setting, which (we hope) means he will value each match he gets more.

Moral of the story

If the algorithm decides I’m a low probability of match with Billy, then I have to wait the entire 18 days for him to see me…and that’s assuming he’s logging in DAILY and voting on all profiles. An average user logs in 5.2x/week, so realistically, the wait is even longer. Chances are, after 18 days I’ll get caught up in a product launch or a trip to NYC or LA and forget about him entirely. I mean, he’s still just a face on an app! Or, another scenario is that perhaps Billy hits it off with a match he gets the next day and ends up seriously dating, and takes a League Time Out to pursue that relationship. Billy and I never even got a chance!

Rather than give myself CEO super powers and force match myself with Billy (although I’ve contemplated going about this route? ), I decided it was better to build something other users could benefit from too. We did some analysis on the varying ‘heart queues’ for our users across LA, SF, and NYC. Essentially all AllStar Profiles had a waitlist, so the TTM (time-to-match) from initial heart to match date was MUCH longer than what would be ideal for a busy working professional that has one open night that week. At a couple of our League Mixers in LA, SF, and NYC I talked to users and discovered that almost all of them had the same issues I do around timing, availability, and matching up with others that have a similar level of motivation (e.g. willingness to get off the couch to meet someone new). Looking at all this data made me realize The League needs to also prioritize profiles based on INTENT, not just probability of match. Our probability algorithm needed another variable to know that a user REALLY likes someone and is motivated to meet them in person.

The best proxy for intent?

It’s putting your money where your mouth is! We designed a Power Move feature that allows us to identify someone who is serious about meeting in person. This would serve as a signal that tells the other person you are interested in them (and more importantly, NOT a flake!) and gives our users the ability to take more control of their dating lives and timing, just like they do with their professional lives. The Power Move allows you to pay a small fee to skip the waitlist of a profile you fancy, and be guaranteed to show up in their very next batch with a special indicator that shows you’ve made a power move. Timing woes begone.

To make a Power Move, users of The League can just tap on

the lefthand icon after they’ve hearted a potential match. You can even opt to send a personalized note to them through their concierge to really make a killer first impression.

Data shows that when someone indicates interest, the other person is 3X as likely to reciprocate and make a match. It shouldn’t be surprising that people on The League are attracted to those who go after what they want; that’s what ambition is. According to our studies, both women and men agree initiative is ‘sexy as hell’.

For us, impatience is a virtue when it comes to dating, and those who go after what they want, tend to get it. And if it turns out that person is ‘the one’ – wasn’t it worth the $7?

Take the new feature for a spin and let me know what you think!