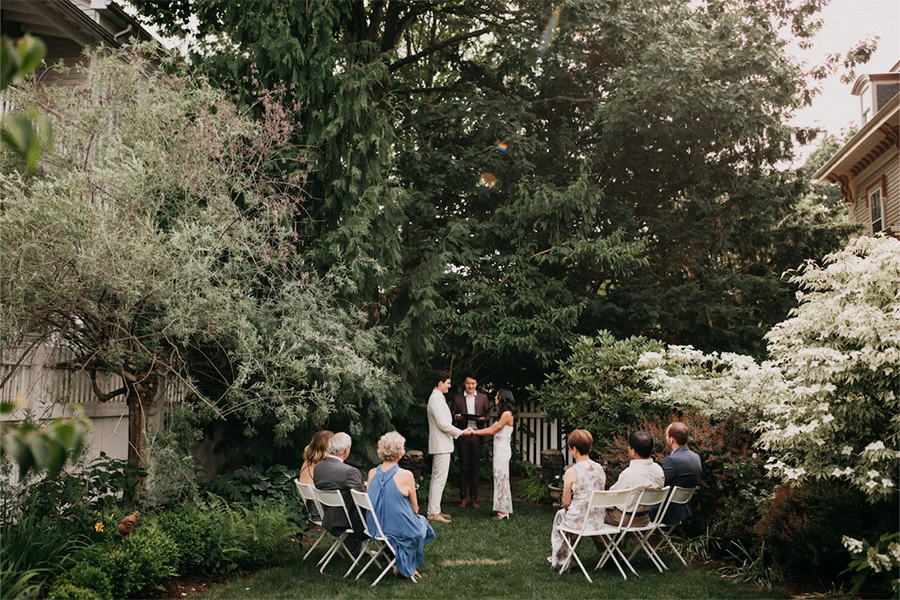 In this New York Times Mini-Vows article by Kristen Bayrakdarian, Bayrakdarian recounts how Vicky Guo and Patrick Roath decided they were ready for the next big step in their relationship. (Photo by Jess Nadolski / Ramblefree Photo Co.

“Ms. Guo, 32, the director of ventures, strategic investments and partnerships at Pearson Education in Boston, and Mr. Roath, 34, a lawyer at the law firm Ropes & Gray in Boston, first connected in January 2017 via the dating app the League.” … After “a two-year Amtrak romance along the NE Corridor, … Ms. Guo suggested the pair ask each other the ‘13 Questions to Ask Before Getting Married,’ that were listed in a 2016 New York Times article by Eleanor Stanford.”

“’I sort of thought of it as a joke but she took it very seriously,’ Mr. Roath said. ‘They’re good questions,’ Ms. Guo countered. ‘They’re very practical and I would say I’m a very practical person. It let us think about how to organize our lives so that we can move forward.’ The couple discussed the questions listed over the course of several days. “At the end of that I was like ‘OK, so now we can get engaged!'” Mr. Roath said.”

If you’re curious, Stanford’s list of questions are “intimate and sometimes awkward” and outline a series of topics for couples to seriously consider before taking the plunge into marriage. “If you don’t deal with an issue before marriage, you deal with it while you’re married,” said Robert Scuka, the executive director of the National Institute of Relationship Enhancement.

“For the proposal, Mr. Roath told Ms. Guo that Ms. Stanford was coming out with a book called ‘The 14th Question,’ and that the author was doing a special ‘book talk’ event in Boston in March 2020, to which he had reserved tickets. ‘I had these doctored emails that were purporting to come from The Times and all these things suggesting that this was a real book talk,’ Mr. Roath said. The ‘book talk’ was to take place at the hotel bar where the couple had first met, with the 14th question being, of course, ‘Will you marry me?””