“It was very clear that we were on the same page from the very beginning. The conversation was normal and easy and we had so much in common.”
Chicago, Illinois 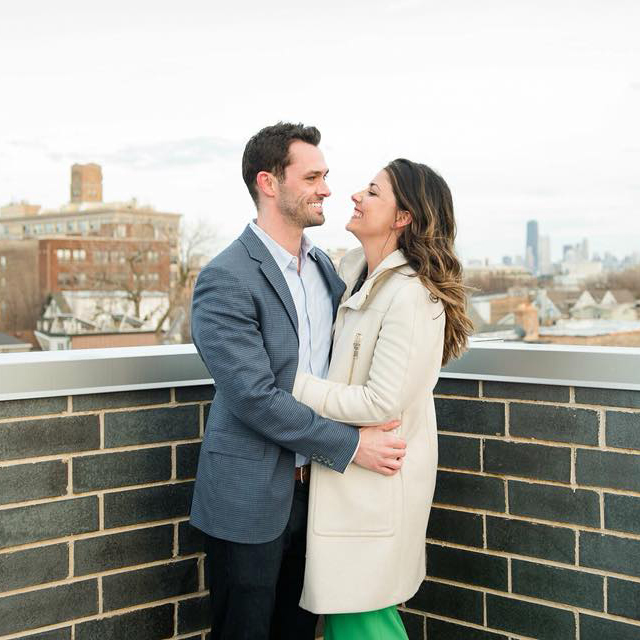 Tell us your #LeagueLove story in your own words!
I moved to Chicago in the summer of 2016: my third city in 5 years. I landed my dream job working to combat educational inequity on the southside but was still on the hunt for my dream partner. A friend from NYC introduced me to The League right as it was launching in Chicago. Ross was my first match. I started to lose hope after a few days of unanswered messages, but it was a very busy time for him as a lifelong Cubs fan and season ticket holder. I decided not to hold a once-in-a-lifetime World Series run against him. We had our first date the weekend after the Cubs won it all at a pizza place near my apartment and returned there a year and a half later for a surprise engagement party with our family and friends after he proposed. 🙂

What stood out about each others profiles?
The first thing that stood out to me about Ross’s profile was his bright blue eyes and perfect smile. Then to see that he also worked at IBM… it seemed like an impossibly perfect mix of brains and good looks 🙂

Who initiated conversation on The League and what was the conversation like?
Ross sent the first message. I responded right away and then when I didn’t hear back, I figured it was too good to be true. I couldn’t believe it when he sent another message a few days later. He immediately made it clear that he was interested in meeting up in-person, which I found very rare on any other app and helped me know that he was for real.

How did this match feel different than other matches you had previously?
It was very clear that we were on the same page from the very beginning. The conversation was normal and easy and we had so much in common.

How long did it take before deciding to meet up?
Less than a week.

Where did you go on your first date?
A pizza place in my neighborhood at the time.

When did you know that this was “your person?”
About a month after our first date, Ross invited me to a concert with him and his group of friends. It was the first time that I really got to see what his life was like and the kind of person he was outside of our one-on-one interactions. He was even more kind, funny, and genuine than I had thought, and I knew from that point on that I could not picture a future without him in it.

What do you each consider a unique aspect of your relationship now?
Even though we come from different backgrounds, our views on all of life’s most important aspects align perfectly and we talk about planning for our future frequently. Big decisions are easy for us, which has allowed our relationship to grow and progress quickly.

What are 3 things you value in your partner?
Trust, selflessness, and drive.

Ready to find the other half of your Power Couple?