Chapter 2: Getting Off The Bench

How to go from Match to Message

Trust us, this whole new dating app concept is new and weird and pretty awk…and most of us haven’t ever used a dating app – so how the heck does this all work? How do you get from Match to Malbecs? From heavy vetting to heavy petting?

Rumor has it that, even amidst our fool-proof screening process, there are still some flakes on The League. And by flakes we mean: guys and gals who match but don’t message. Lame… but, let’s be honest, we’ve all been that dude/dudette, so let’s not judge anyone too harshly here. 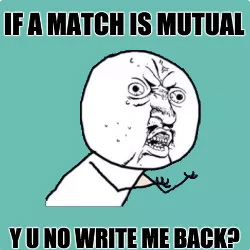 We thought we’d combine some basic pointers, while also incorporating feedback from our users and examples of good and, well, not-so-good texting game. The hope is with The League you will meet great people that you wouldn’t normally have met in real life. Maybe your special someone doesn’t hang out at [insert yuppie bar name] every Friday like you do. Or maybe they’re at expensive destination weddings every weekend just like you were last year. That’s where The League comes in to make sure you don’t keep missing each other.

Let’s be clear: the goal is to meet in person as soon as possible. Hey, if it turns out there aren’t any sparks, well, at least you met someone cool. You won’t know until you go.

PART 1: THE MATCH
You got through the first hurdle: not getting rejected! Congrats hot stuff! What to do next?

Scenario 1: You got the Home Run. Onus is on you to initiate the conversation since you’re the one who clearly has the app open, silly. Girls, don’t be shy, this is 2015 and we know you’re handy with that keyboard. It’s not like you’re asking the guy on a date, you’re just saying hi!

Note: Boys, even though we believe girls should message first just as much as guys should, we’re all smart enough to understand data/statistics and know that this gender behavior change won’t happen overnight. In the meantime, realize there’s many a girl out there that expect you to send them the first “hello!” Don’t be a slacker.

Scenario 2: Your match got the Home Run. You just got notified, but the other user hasn’t messaged. Chill. There’s a ton of people out there who have anxiety about what they should send as their first message or are totally new to this mobile dating app world. Relieve their stress and just send something to break the ice – even a “Hey [Name] how is your Monday going?” is better than nothing! Remember, you both expressed interest already, so you’re already through the awkward part!

Scenario 1: Your match has no game. Go easy on them. Not everyone is as funny and witty as you are, you rockstar. We’re guessing what they lack online, they make up for offline. And, hopefully they will read Chapter 2 and will pick up a few tips to improve. Take a chance and meet them anyway, even if it seems they don’t understand sarcasm. We promise there’s likely something redeeming about them or they wouldn’t be on the League… and if it turns out we’re wrong, well, report back to your concierge and we’ll put them on watch….

Scenario 2: You stuck your neck out there, and your match doesn’t write back. F’ em. No, just kidding. Don’t get your feelings hurt. There are a couple potential reasons here: 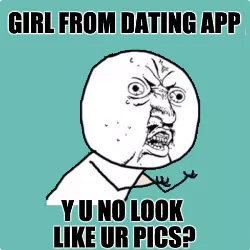